Welcome to Dive Seven — a FREE service for logging, sharing and researching your scuba dives. Take the Tour and Sign Up!
PREVIOUS DIVE Alien Blood
Revisiting Cozumel NEXT DIVE

After a nice surface interval in the sun I felt much better than I did after the first dive at the Canyon.

An easy entry straight into The Chimney, making a loop through a horizontal arch in the wall (known as the bells in homage of the many tanks that hit the walls there). After this little stunt we followed the reef southwards towards The Blue Hole.

The reef wasn't that special. The wall itself was massive and it's easy to imagine that it was once quite spectacular. I couldn't work out whether it's condition was natural or related to damage from divers or coral bleaching.

We saw some bubbles coming up out of the blue from below. I later learned that these were technical divers descending to the sea-side mouth of the tunnel that runs to the inside of the Blue Hole. Further on we saw another diver descending very quickly, checking the schedule strapped to one arm against the watch strapped to the other. 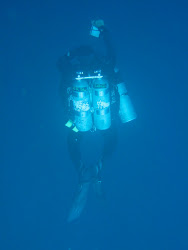 Entering into the blue hole Anwar was approached by a crazy looking snorkeller in speedos, covered in tattoos, who wanted his photo taken. Anwar very calmly obliged, but the moment was too funny to not talk about afterwards. Rick got a great shot of the moment. 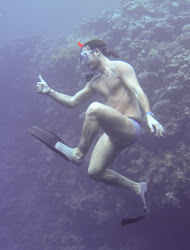